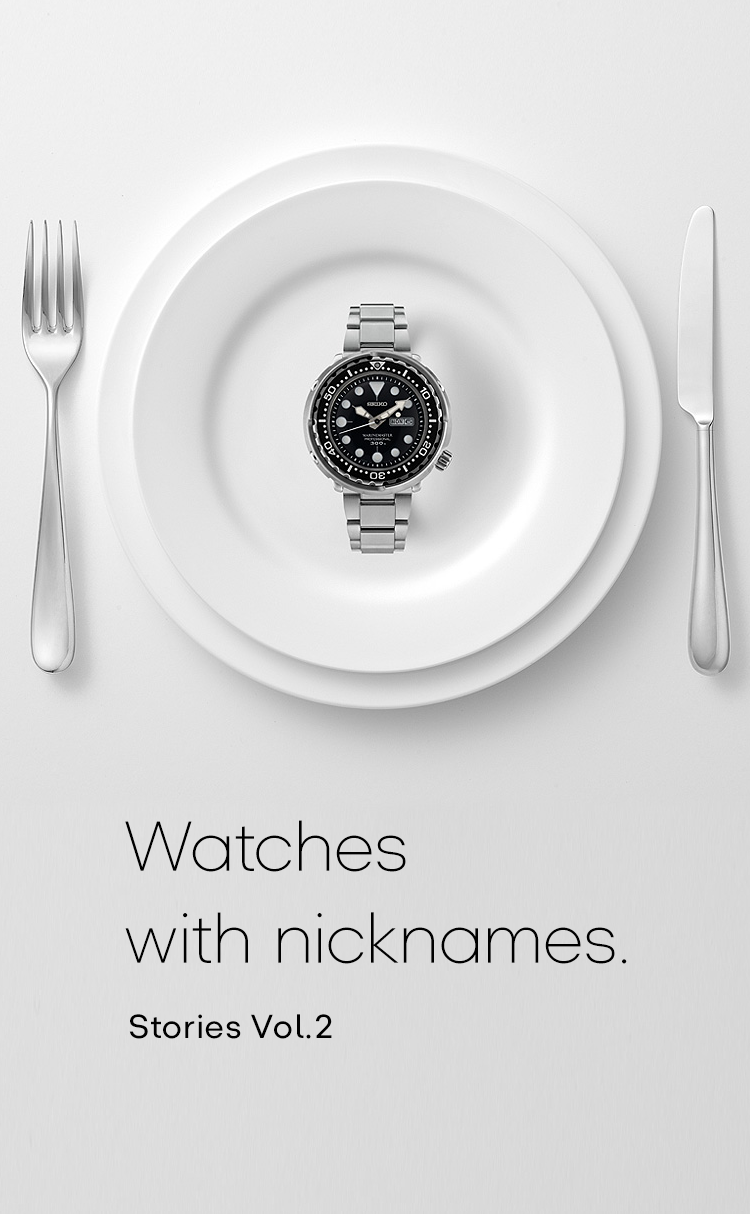 In places unknown to us here at Seiko, and without our awareness, it seems there are certain Seiko products and models that are so popular that our fans have given them their own nicknames, such as “Tuna Can,” “Monster,” “Samurai,” and “Turtle.” Of course we, as the designers, did not come up with these nicknames ourselves. Our fans came up with them spontaneously, all on their own. But how on Earth did this actually come about? Satoru Monjugawa and Takumi Kishino from our Design Center Department exchange some imaginative interpretations of this phenomenon. (October 27, 2017)

Satoru MONJUGAWA
Monjugawa joined Seiko in 1992 and for many years designed Seiko watches destined for the international market. Today, he sets and oversees the overall design direction for Seiko, with a particular focus on PROSPEX.

Takumi KISHINO
Kishino joined Seiko in 2006 and has designed many watches destined for the international market with Seiko’s youthful customers in mind. He also designed for the WIRED brand which is popular among young people in Japan. Today, he designs for the Japanese market. 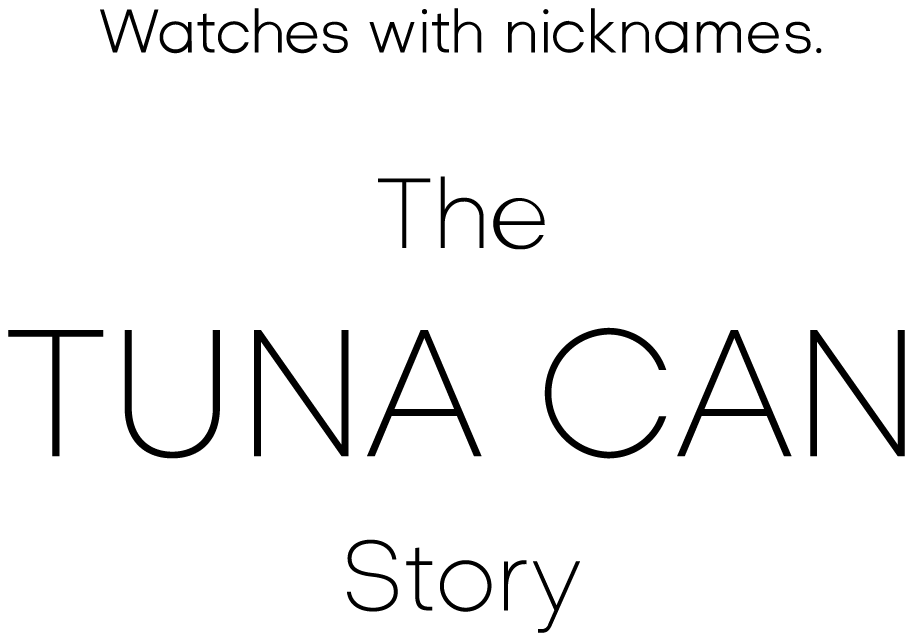 An unrivaled design and the very personification of Seiko originality. Called by the nickname “Tuna Can” because of its shape, this watch has been loved by watch fans for decades since its release in 1975.

Verification: Why was this watch given this nickname? The Tuna Can Story

Monjugawa: First of all, the diver’s watch with outer case protector that is nicknamed the “Tuna Can.” This is the best known of all the watches that have nicknames. It’s a simple design that brings to mind a sliced off portion of a pipe. It’s quite bulky and the diameter and thickness balance struck some Seiko fans as looking like a can of tuna. The watch bezel is a metallic color and this also is reminiscent of a tuna can. And if you turn over a tuna can the round bottom has a watch-like shape.
Kishino: The original watch had no case back and was a one-piece case construction that could only be opened from the front. It had specs that enabled extreme shock resistance and immersion-proof features.
Monjugawa: And it was perhaps these very features that brought to mind a can of tuna. The outer case protector that wraps around the side of the watch is a special shape created with unique Seiko ideas and techniques. Just as cans protect the food inside, the outer case fully protects the body of the watch.

Kishino: The simple cylinder and band configuration with very slight curves, clearly different from the beauty or real full curves, is true functional beauty. You might very well feel that this watch has not really been “designed” as such, but if you take a very, very close look you will find here and there some very thoughtful details that have been incorporated.
Monjugawa: That in itself is an exceptionally important element of product design. How do you fit this finely honed device onto the owner’s wrist? This is where the designer gets to show off their individual talents.
Kishino: With that in mind, if we relook at the watch, you’ll see that it’s a well thought out design. It’s not a simple can resting on your wrist. It’s smoothed to fit where it contacts your skin.
Monjugawa: But, no matter how you look at it, this watch is a tuna can. In one sense I feel that this tuna can nickname came about because that’s the name it really deserves. 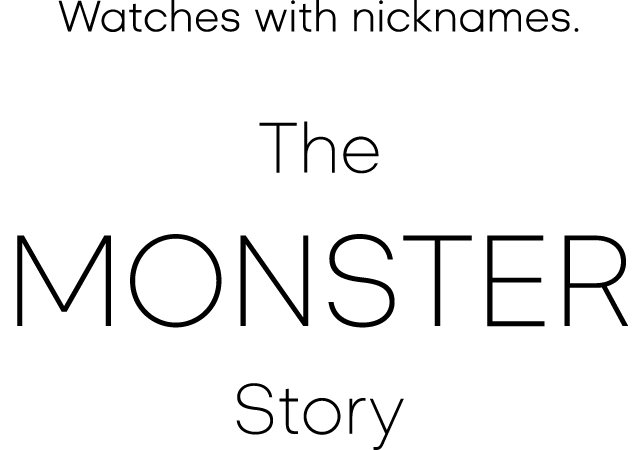 A monstrous aura that you won’t forget even after just a quick glance. Many fans are captivated by its shape which has an impact derived from its integration of function and design, and by its strong visual appeal.

Verification: Why was this watch given this nickname? The Monster Story

Monjugawa: The model referred to as the Monster has an awesome face. I guess this is because it looks like a monster with its mouth wide open and baring its teeth. It’s like those worms that move around so freely in the middle of the desert. If you look at it in that light, the jagged bezel gives you the impression of the bony skin of a dinosaur.
Kishino: And the hour hand looks like a claw. If you look at the watch sideways, it’s a little like the meshing together of fat molars. And there is power in the designs of the Arabic numerals and markers.

Monjugawa: The long minute markers on the dial look like a manga depiction and enhance its sense of power. It’s the image of something coming right at you. The “Monster” nickname really seems to fit.
Kishino: The power seems to be concentrated in the center of the dial. I don’t think there are any other watches with a design like this.
Monjugawa: You’re right. Although the entire shape itself is monster-like, its whole existence is maybe monsterish as well. It’s still selling well with only minor changes in color and finish. So I guess you could really call it a monster of a watch.
Kishino: Each design element is overstated in a good way, giving it an intense presence. And that leads to its monster-like aura.
Mojugawa: That’s right! This is one mean watch.

Watches with nicknames "The SAMURAI Story" 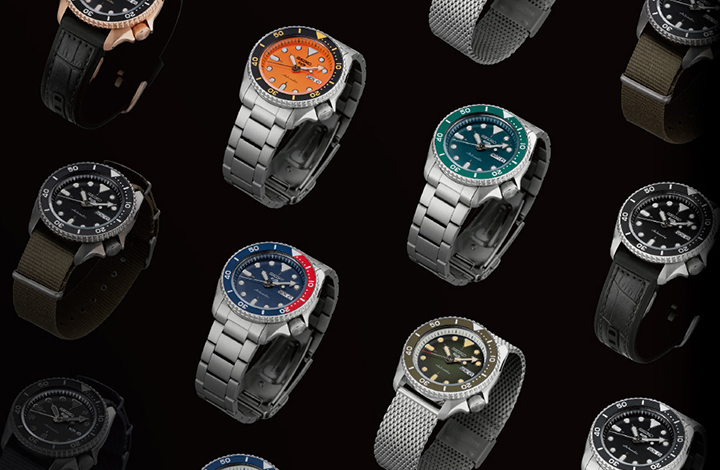